Southwest Airlines just made it a little more difficult for its loyalty program customers who “wanna get away” by devaluing its Rapid Rewards program credits to require more points to buy plane tickets.

The Dallas-based carrier on Wednesday devalued Rapids Rewards points by about 6.5% percent, meaning a flight that once cost 10,000 frequent flyer points will now cost about 10,650.

Southwest confirmed the changes to its Rapid Rewards, Anytime and Business Select Rewards program “to maintain that unique combination of value” from the program’s various benefits, said Southwest spokeswoman Tiffany Valdez in a statement.

The move could be the beginning of a slate of similar actions by airlines after giving away points and miles over the last year, selling them at a discount or making other moves to entice customers to stick with frequent flyer programs even though they weren’t flying during the COVID-19 pandemic, said Zach Honig, editor-at-large for travel news website The Points Guy, which wrote about the devaluation of Rapid Rewards points Wednesday.

“Airlines have essentially minted points and miles during the pandemic to raise money,” said Honig said. “My guess is that there is a significant glut of points and miles sitting in accounts right now.”

Many customers with canceled or suspended flights were also encouraged at times to turn their travel vouchers and credits into frequent flyer points, adding to the sizable number of outstanding miles in customer accounts.

Frequent flyer programs, such as Rapid Rewards at Southwest, have grown in importance to airlines after several, including American and Delta, used their programs and credit card offerings as valuable collateral on multibillion-dollar loans to raise liquidity to get through the pandemic. American Airlines used its AAdvantage program for $7.5 billion worth of backing on its federal stimulus loan. United used its program for a $5 billion loan through private banks.

Southwest Airlines never put its frequent flyer program up for backing on a loan, but the airline has worked hard to keep its customer base. That has included extending frequent flyer status through the end of 2021 for people that earned it in 2019 and giving short-term “companion passes” for people who signed up for credit cards.

The carrier, along with competitors, has also sold points and miles in order to raise the cash it needed to get through the pandemic when liquidity was hard to find.

Unlike most airlines, Southwest’s frequent flyer program points are based solely on the price of a ticket. Other airlines use a combination of factors to compute the value of miles and points, including distance, ticket types and partnerships with other airlines.

It’s rare for an airline to enact such an across-the-board change to a points or miles program, Honig said. The change was also unannounced to customers, meaning travelers didn’t have a chance to buy tickets before the points increase took place.

Southwest last devalued its frequent flyer program in 2018, but in 2019 the company upped the requirement to get a Companion Pass, one of the most coveted perks for Southwest customers that gives a free ticket to a buddy when flying.

That glut of frequent flyer points and credits could play a major factor in the coming months. Airlines have reported an uptick in new ticket sales in recent weeks and carriers have responded by bulking up schedules for the summer. Just this week, Southwest Airlines launched service to Houston’s George Bush Intercontinental Airport and Santa Barbara International Airport in California.

And after a 2020 year where U.S. airlines lost more than $35 billion, carriers will be looking to sell tickets for cash in order to turn losses into profits. 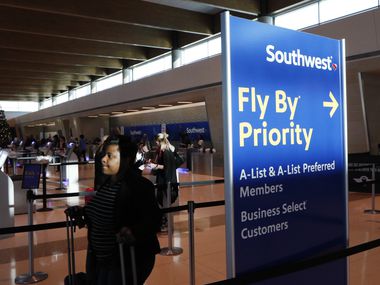